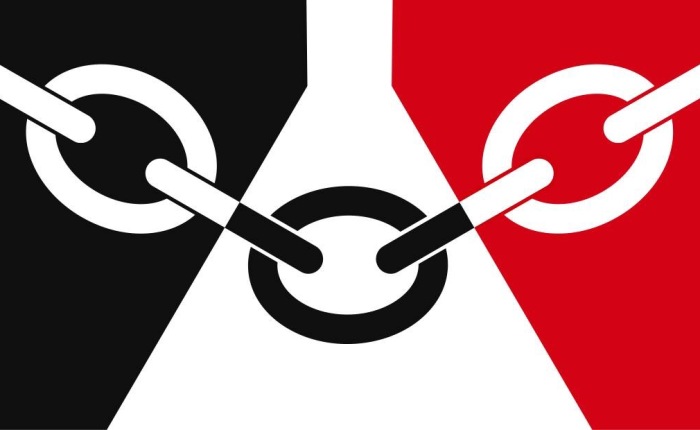 You knew there would be another blog along soon, didn’t you? Thought I’d give old WordPress another try out, so I’ll rehash this old thing as a trial foray into the blogosphere – you just know it’s bound to fail, don’t you?
Yes, normal service has been resumed as we consider one of the most important topics of our time, so sit up straight and pay attention.

Just to show my impartiality on the subject (yeah, right!) we’re flying the Black Country flag at the top of the page, just in case you wondered what that was. Neutral see.

Anyway, let me repeat – The EU.

The answer my friend is blowing, not so much in the wind, but more through the tiny spaces between the ears of our elected representatives. Yes that’s what that strange whistling noise has been, it’s not interference on your t.v. madam!

It’s certainly put the cat amongst the pigeons hasn’t it?

‘They’re lying,’ scream the ‘ins’ about their opposite number, ‘It’ll cost a fortune to come out!’
Meanwhile the ‘outs’ are whinging, ‘It’ll cost a fortune to stay in, don’t listen to those nasty rotten fibbers,’ to anyone who’ll listen.
The trouble is the only ones listening are the idiots in the other camp and for them to hear the opposite point of view expressed with quite so much vitriol gets them a bit hot under the collar. Inevitably the game of comedy name calling spirals inexorably out of control, whilst the rest of us wonder how the hell we ever got into this mess in the first place.

In essence it boiled down to a vague idea by our own beloved Mr Churchill. Unable to quite believe that we’d actually won the war and probably deeply certain that we wouldn’t be able to pull off the same trick again he suggested that it might be a jolly idea if we all sang ‘Ging, Gang, Gooley,’ together around the camp fire the way that spiffing chaps do after a bout of the old Queensberry rules. (After all, we did seem to owe the guys across the pond an awful lot of money for all the nylons and candy they’d supplied since 1941 – so it might be handy to have a bit of a whip round with our new European chums).
Worryingly though, apart from a lot of gesticulating with two fingers poor Winny didn’t have much of a clue how to go about it.
Neither did the men from the ministry. The clubs that they used were old, set in their ways and full of overstuffed, careworn, leather wing-backed chairs. They didn’t have much of a stomach for any sort of new arrangement and so they left it to Johnny Foreigner to draw up the rules.

And so a few years later up trotted a European superstate, broadly based on the federalist goals of the very bounders that we’d beaten into submission only a few short years before. And lo and behold our old chum Mr De Gaulle wasn’t about to let us join in the fun. Having taken cover over at our house while we did the fighting on his behalf he suddenly forgot his manners.
It certainly wasn’t cricket, but it damn well was our ball and they couldn’t play unless they let us bat first.

Out for a duck!

Essentially what happened next was that the ‘outs’ used to be the ‘ins’ and the ‘ins’ used to be the outs. There you are, European politics summed up in a nutshell. What had occurred as usual, was that our leader’s perceived view of public opinion appeared to swing against them and so they simply swapped coats. Nothing to do with the good of the country, more a question of maintaining their place at the top of the dung heap. Remember the old adage, ‘where there’s muck there’s brass’ – in the case of the Euro-gravy train there happens to be quite a lot of brass, courtesy of us poor citizens.

Politicians know Jack. That’s the lesson the rest of us learnt a long, long time ago.
Around the time of Simon de Montfort in fact.
And yes, I do know that many of you will say that our member (appropriately enough) of parliament works very hard on our behalf and perhaps that is true, But collectively? As much as they say they do know, the more it becomes apparent that their ambition is a good deal greater than their IQ. Listen to the weekly debacle PMQ’s if you doubt the truth of what I’m saying. You’d get more sense from your local nursery school.

Should we shake it all about? Probably, it’ll be so much more fun!

Next time I may discuss the geopolitical map – put on your tin hat for that one!

By the way, does anyone remember the words to ‘Ging, Gang, Goolie?’