I’ve been away for an awfully long time.

But I thought I’d give you all a bit of a break. After all it’s been a nice summer so why ruin it with some old git whinging about this, that and the other?

But now I’m back! You have been warned.

Autumn is here, or ‘Fall’ as my American friends would have it and I’m in the mood for a right old moan.

I saw that too! No need to raise your eyes to the heavens like that, no need at all.

‘So what’s the old bugger grizzling at now?’ I hear you cry. ‘Brexit? Trump? Mourinho?’

Well it’s none of the above, although it could so easily have been.

No, what’s deservedly earned my scorn is, wait for it – gas!

Thinking about my American pals again I must explain that I don’t mean petrol. Come to think of it, if they call petrol, ‘gas’ what do they call gas? Very strange. Anyway I digress.

Now some of you may be aware that I live in a mobile home, or ‘park home’ as they’ve recently re-labelled them. Actually I call it a caravan but not too loudly because it upsets some of the neighbours.

On one side is the canal, to the other is the brook (recently also re-labelled as a river, but I don’t know who they’re trying to kid).

Very picturesque it is too, which is why I’ve lived here for the best part of thirty years and why Kate gave up her house when we got married. Job’s a good ‘un, as we say in these parts.

But, due to our location we are not connected to mains gas.

So we have a tank.

No madam, not a Challenger or a Panzer, please pay attention – this one is for LPG. 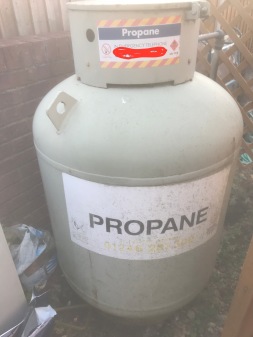 And, every so often, along comes a tanker and tops it up.

They don’t deliver in summer. Fair enough, the heating isn’t on so we only need it for cooking and hot water so we don’t use so much.

Then, one morning last week we noticed a smell.

I checked the tank. According to the gauge we’re running on fumes. The needle is so far past zero that it’s nearly come around to full again.

There is a quite distinctive smell (my Grandad was a gas man back in the day, so I know what the bloody stuff smells like) and an ominous hissing noise from the pipework.

There’s also a shut off valve.

I shut it off.

Obviously the leak is before the shut off valve.

There are labels on the tank. In an emergency call this number immediately!

It rang for quite a long time, giving me pause to reflect that following my heart attack four years ago I had been very sensible to give up smoking, otherwise I may now be flying through the air with my eyebrows singed.

‘Oh.’ She replied. ‘Can you hang on, I think there’s a form around here somewhere that I have to fill out.’

Even with the immediacy of the situation I did find that strangely reassuring. At least these things don’t appear to happen very often, I thought. Perhaps I wasn’t in danger of being blown to kingdom come after all.

Eventually she came back, ‘Have you got your account number?’

I held it together admirably. ‘No!’

She made do with my postcode.

‘Have you turned off the gas at the regulator?’

‘No, but I did turn off the shut-off valve and that made no difference.’

I imagined her desperately thumbing through some technical manual trying to find a solution.

My gob was smacked!

Translation once more for my American buddies – FFS!

But – and this is what has really got my goat – she put me on to someone else.

‘No,’ I told her, ‘the gauge is reading way below zero, it must have nearly all escaped!’

‘Actually it hasn’t.’ I thought she sounded rather smug. ‘I think you’ll find you’ve run out. You should have phoned up and ordered some more when it got below twenty five percent full.’

‘That’s not gas.’ She delivered her coup de grace. ‘We put in an artificial smell which escapes when your tank gets too low so that you know it needs filling.’

Gobsmacked is now an understatement.

‘Yes, I’ll order you a delivery. We won’t know if your tank is leaking until you have some gas in it.’

The tank was filled a mere five days later. The smell has gone. It seems the tank wasn’t leaking after all and little miss smarty pants was right all along.

Two things strike me as strange.

Firstly – if there has to be a smell to alert you that the tank needs filling, why oh why does it smell of, of all things – gas? Immediately you fear the worst, and if my first emergency contact had decided to take a coffee break as the enormity of her career choice clearly hadn’t been explained to her, I would probably have phoned the fire brigade. Why doesn’t the ‘your tank is empty’ warning smell like roses, or freshly ground coffee, or even – heaven forbid – a stale fart?

Secondly and even more confusingly, even with my limited knowledge of chemistry, how the hell does an artificial smell – which is obviously heavier than gas because it sits at the bottom of the tank until the gas is gone – how the hell does it escape from the tank and the gas doesn’t?

Answers on a postcard please.