So – you know how it goes.
You’re bored.
At a loose end.
Facebook has the looney left, the rabid right and the cautious centre all abusing each other for the debacle which has become British government – or lack of it.
What’s a chap to do?
I know, how about that old table up the corner, the one we inherited when we cleared Dad’s house?
Is it worth anything?
What’s it’s story?

I’ll Google it out of idle curiosity.
But what do I call it?
Well, it has a marquetry picture of Muckcross Abbey on the top and it’s a gaming table.
That’ll do for starters.
Tongue stuck between teeth I type, ‘m-u-c-k-c-r-o-s-s_a-b-b-e-y_g-a-m-e-s_t-a-b-l-e_enter’
Got a few results, so stick tongue back to where it should be.

Try this first one.
BLOODY HELL! There’s a photo of it here. 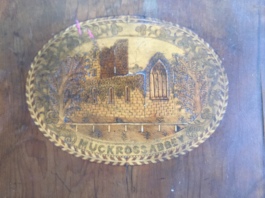 An exact match.
And it’s in – wait for it – the Royal Collection.
I know, I know. That’s what I thought!
Liz and Phil have one too!
I bet they unfold it every night before bed (after Corrie probably) and have a quick game of whist while they scoff their supper from the Tupperware. 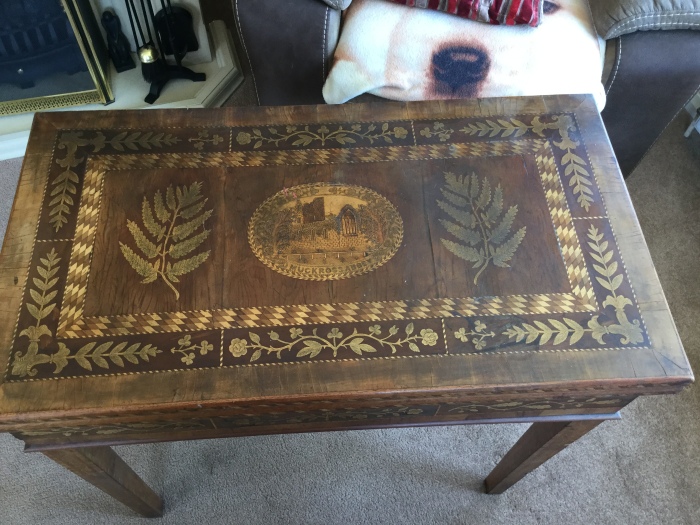 Well fancy that.
I need more information.
I look at other sites.
But I don’t see it. There are similar, but the legs are different.
Now let’s just quash any comments to do with me having Queen Anne legs straight away, shall we.
I know you lot.
Hmm.

I Google the history and learn quite a bit.
Apparently it’s Irish in origin.
That’s where the Abbey is, so that makes sense.
Killarney-ware, it has a name.
It was made for the tourist industry.
Bugger! that means they probably made hundreds of the bloody things.
Ah well – never mind.
That’s how the Windsor’s got theirs obviously, Victoria and Albert must have got it for their museum when they were over on their holibobs. 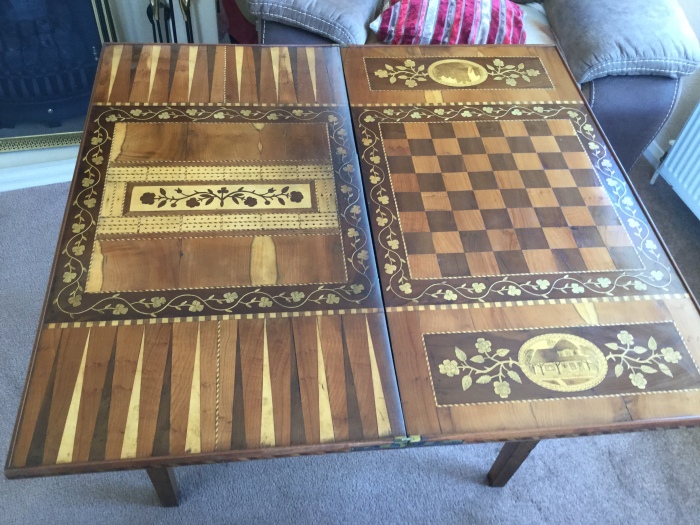 Someone’s posted on Facebook that May is a raving idiot, Corbyn’s a knob and no one knows who the Liberals are anymore. But here, among the vitriol is a post telling me that the Antiques Roadshow is coming to the Black Country Museum in a few weeks time.
It wouldn’t hurt to go would it?
You never know, do you?
And Fiona Bruce is a bit of a sort isn’t she?
You prefer who?
Really? well never mind. Each to their own.
And ‘guns & militaria’ is a really hot subject isn’t it? If you like that sort of thing.
Uniforms and stuff. Weapons of mass destruction.

Anyway, what’s this?
Oh. It says here that you can get in touch and see if they might be interested.

They even came round to our place and had a look at it.
Kate said they seemed very keen (I wasn’t there) and I had to take it down to the museum the night before the show was to be recorded.
Deep joy.

I phoned bro on his holidays – no he wasn’t in Ireland or I might have asked him to buy another one – as back up. Well you never know, a spare might come in handy.
‘I’m back home,’ he said. ‘Bit of a disaster, came back early – me and Sue (sis in law) will come with.’
Bostin’. As they say in these parts.

So off we went.
Have you ever been to The Black Country Living Museum?
You ought to try it.
There are trams and trolley buses, an old fashioned funfair, all manner of reconstructed old buildings (including a pub). Oh look, there’s a terraced house like the one I used to have! There are old shops, a mine, a working beam engine. Well worth a look.
And today there are – cameras.

The day is hot – unbearably so, and to start with there are not many there.
I’m a bit miffed. I have a special pass to get ‘fast-tracked’ through the throng and there’s no resentful queues to bypass.
Bummer!

‘Sit there,’ commands the man on reception.
So we sit.
There.
It is the BBC after all. I pay a licence fee for this you know and I’m glad they’re being so assertive with my money.

Oh look, there’s old wotsisface – doesn’t he do furniture? And there’s her that does the toys. Oh, oh, over there – it’s your mate from ‘guns & militaria?’
Yes, you’re right, in the flesh he is a bit of a disappointment.
Eventually up rocks the producer.
‘Hello,’ he says, ‘I’m the producer. I’ll find you an expert.’
I giggle and bite my tongue.
He looks at me strangely, but I resist the urge to tell him the definition of an expert.
Oh, surely you know that old chestnut.
No?
An ‘ex’ is a has been and a ‘spurt’ is a drip under pressure.
See, you did know it didn’t you. I could tell by the groan.

Anyway, after a bit Steven Spielberg or whatever his name was comes back with our ‘expert’ in tow.
We introduce ourselves.
She’s Elaine Binning
She’s very nice. It turns out she knows her onions. Shame we’ve got a table.                               No, I was joking, I couldn’t resist – she’s very knowledgeable.
We tell her what we know about our heirloom.
She seems impressed.
Alfred Hitchcock, or whatever his name was, tells us to wait in the hospitality area, where we’ll get refreshments and some makeup.
Makeup!!!
No one said anything…
Oh well, I suppose the champagne and caviar will compensate for being girlyfied. And I must admit that my forehead is a bit shiny.
It’s a cuppa and a hobnob.
Cutbacks I suppose.
At least we get to go on T.V.
Isn’t it exciting?

I try to be nonchalant. After all I’ve been on local radio four times now and done the same amount of podcasts in my capacity as author don’t-cha know. But they didn’t involve make up. 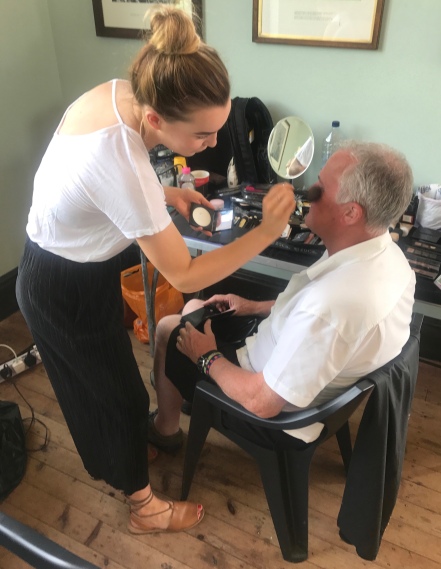 This is the real deal. I start rehearsing my BAFTA acceptance speech.

Bro and I do the thing. You know, ‘how much do you think it’s worth?’ My conservative £800 counters his wildly optimistic £1500.

And now we’re off to find out. We’ve both been smothered in foundation, powder puffed to within an inch of our lives and we’re marched with our non reflective foreheads down through Black Country streets of yore for people to point and smirk at, ready to go in front of – lights, camera, action. 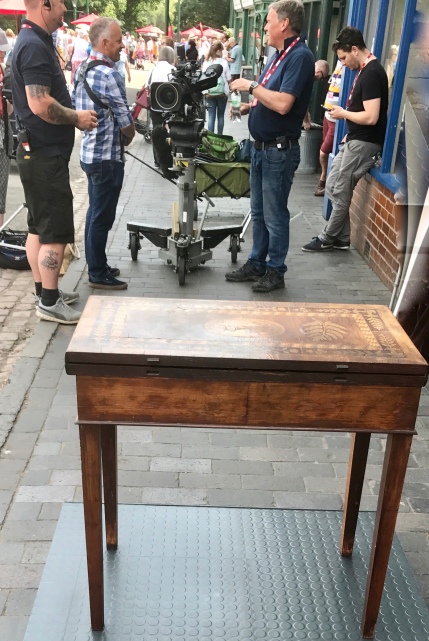 It takes ages.
There is a chat about the table. That’s interesting, I wondered what the wood was. And it’s what!? 200 years old!
Bloody hell!
I thought 150 at most.
That’s why it’s got these old fashioned legs.
But how much?
Hang on. We have to reshoot that bit.
Someone’s hand was in the wrong position.
It’s o.k., they’ll cut it in when they’re editing.
See I know about these things now.
Has she said what it’s worth?
Am I supposed to be talking?
Or is it you?
Oh, we’re supposed to be listening, ‘with interest.’
Talking of interest it’s how much?
Hang on, can you just repeat that phrase. The microphone didn’t quite pick it up.
‘Did you say that you inherited it from ‘my’ Dad? Your brother is here too you know, shouldn’t that be, ‘our’?
I have to redo it.
‘Our father,’ I blurt out rather too confidently, before realising I sound as if I’m about to start praying.
FFS!
I do it again.
Has she told us the value yet?

I’m distinctly aware that my newly flattened brow is sweating profusely and my hands which I’ve had so comfortably at the ends of my arms for over sixty years seem to have developed a life of their own. What are they doing! From that camera angle I probably look as though I’m playing with my willy.

Dear God, let it be over soon.
Now what’s she wittering on about?
Not the bloody price is it!
‘All in all it is a very nice example,’ says Elaine. ‘Do you have any idea of value?’ she smiles sweetly.
I shake my head dumbly.
‘Well then,’ she declares, warming to her theme…

I never did get to meet Fiona.

But I may be on the telly!