Sometimes something triggers a question in your brain that just demands an answer.
Take the other night as I was sitting in the pub for example.
Yes, I know – we’ll argue about my excessive drinking later, o.k?
Someone has to keep the brewing industry going after all.
And it may as well be me.
I insist. It’s no trouble, honestly.
Sorry?
I’m looking ‘a bit put out’?
Well now you come to mention it I am feeling a tad disappointed.
It’s nothing really, nothing at all. Don’t worry about it.

I just thought you might have offered to buy me a drink, that’s all…

Anyway, back to the subject of my rambling thought processes.

On the wall of said pub was a picture.
Of a pit head. 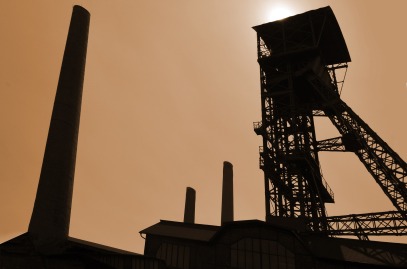 And the winding gear.
There used to be a lot around here in the Black Country.
Probably the name of the area hints at that very fact.
I remember passing one such industrial monolith on my way to school back in the sixties.
Of course I took no notice, it was not an unusual feature back in the day.

But – thinking about it now, who on Earth came up with that?
Imagine the scenario – wealthy landowner calls the local gravedigger to his mansion.

Gravedigger deferentially enters the drawing room, wringing his flat cap in his hands and stands in front of the landowners expansive desk nervously awaiting the reason for his summons.
The landowner stubs out his cigar, ‘Ah, good of you to come my man. Scargill isn’t it?’
Okay, okay – we’ll argue how Arthur Scargill’s ancestors got from Dudley to Yorkshire later, eh? Probably something to do with black pudding and flat caps for all I know, there is a bit of commonality there after all.
”Tis indeed Scargill sir, but Ayenock’ll do.’
‘Good man, good man. How’s the family?’
‘Fine sir thanks for asking. Missus popped another bab out last week while she was shovelling out earth for that canal you wanted. Fifteen that is now I think.’
‘How is she?’
‘Pregnant again, sir.’
‘Excellent work, that man.’
‘Thank you sir. ‘Fraid the two year old ain’t ready yet – turned a bit sickly, got a slight touch of cholera I think – but the one above him, she’ll be three next week and ready to start building hovels for your workers any day soon.’ A slight hesitation for an awkward pause, more twisting of the cap into a figure eight, then, ‘Erm, pardon me asking sir, but what is it you want me to do?’
‘Ah, that: Ayenock, I’d like you to dig me a hole.’
‘Oh I’m sorry sir, I didn’t know you was poorly like.’
‘Not for me to fit in you fool, I need a hole I can own.’
”Well ‘smy job sir, don’t matter to me what you does with it. Usual is it? Six foot by two and a half foot by six foot deep?’
‘Not exactly no, I’d like it a bit bigger.’
‘Bigger sir?’
‘Erm yes. About twenty feet square should suffice.’
Twenty foot – bugger me! Beggin’ pardon sir. Has the elephant died up at Dudley zoo?’
‘No my good sir, it hasn’t. And anyway the zoo won’t open for another two hundred years at least.’
‘Sorry sir, getting ahead of myself as usual. But I has to say it’ll take me an’ old ‘arry all day to dig that out at six foot deep so it will sir.’
‘And I’d like it a bit deeper.’
‘Eh?’
‘Deeper.’
‘Oh, deeper is it? Exactly how deep were you thinking?’
‘Until you hit coal.’
‘Coal.’
‘Coal, yes.’
‘What’s coal then when it’s out?’
‘It’s like a black rock that you burn.’
‘You want to burn rock? Wood not flammable enough for you?’
‘Yes, no, I mean, hrumph! My dear man please remember your place and address me as, “sir”‘
‘Have you had a bump on the head? Sorry, have you had a bump on the head, sir?’
‘Of course not! I need the coal to smelt some iron ore.’
‘Or what sir?’
‘No Ayenock, iron is ore.’
‘It’s or what…’

Now at this juncture I should perhaps point out that this reasoned debate could take some time, so let’s just cut to the chase…

‘Oh! Iron ore is it?’
‘What else would it be?’
‘Dunno sir, you lost me at “coal”‘
‘Scar.., I mean Ayenock, I envisage a day when men like me will be able to drive around in horseless carriages.’
‘Riiiight…’
‘And fly through the air in hollow tubes.’
‘If you say so…’
‘So I need that hole in the ground.’
‘Of course you do, sir.’
‘When can you start.’
‘Well, we’ve got a charred charcoal burner, he got a bit too involved in his work, and three suspected plague victims to inter by this afternoon, but I reckon we could make a start about three o’clock.’
‘Good fellow.’
‘Beggin’ pardon sir, but I do see a couple of slight problems.’
‘You do?’
‘Well first up sir, there’s gas.’
‘Gas?’
‘Bit of a problem working with old ‘arry in a confined space, see sir. ‘Specially if he’s been on the beans and Norbert’s Old Peculiar the night before.’
‘I’ll give you a canary.’
‘A fucking canary! Why thank you sir. Help no end that will.’
‘You said, “a couple of problems.” The second is?’
‘Yessir. Water.’
Oh, I’ll make sure you have all you can drink.’
‘No sir – it’s holes see. They tend to fill up. With water.’
‘Ah!’
‘Bit of a problem if you don’t mind me saying.’
‘Thought of it already, Ayenock.’
‘You have sir?’
‘Had you there didn’t I! Yes, I did foresee that very problem and I’ve asked my good friend Newcomen to come up with a solution.’
‘Very good sir. And has he?’
‘Of course. Bright chap. He’s going to pump it out.’
‘Pump it?’
‘Out, yes. With a beam engine.’
‘A beam what?’
‘Engine. It’s made out of iron ore.’
‘Ore what?’
‘Don’t start that again.’
‘Course not sir, but pardon me asking – isn’t making ore what you need the coal for?’
‘It is, Ayenock. Must I keep explaining myself?’
‘But begging pardon, sir, isn’t that putting the cart before the horsepower so to speak? Slightly? Sir.’
‘Ah!’
‘Bit of a problem, sir?’
‘A minor hiccup. You go and start digging whilst I ponder the solution.’
‘Yessir. Mind me asking sir. What’s this hole in the ground going to be called?’
‘Oh, that’s easy, Scargill. It’ll be called, “mine.”‘